Why Does My Dog Eat Poop? (What Is Coprophagia?)

Have you ever caught your dog doing the unthinkable and eating poop (their own or that of another dog)? In either case, it’s easy to feel disgusted when you see your dog engaged in such disgusting behaviour (known as coprophagia).

You might take a little comfort, though, in knowing that they’re not the only dog doing this. The results of one study showed that approximately 16% of dog owners had caught their dog eating poop. Another survey showed that 38% of dogs eat poop each week, and 62 per cent ate it on a daily basis!

This might be a common issue, but that doesn’t make it any less disturbing. If you’ve found yourself wondering “Why does my dog eat poop?” or “What can I do to stop them?” you’re in the right place. Read on to learn more about coprophagia, what causes it, and how to stop it.

Coprophagia is most common in multi-dog households. Female dogs are more inclined to eat faeces than male dogs, especially intact males. Dogs that are known to be greedy (stealing food off of tables, for instance) are more prone to experience coprophagia, too. 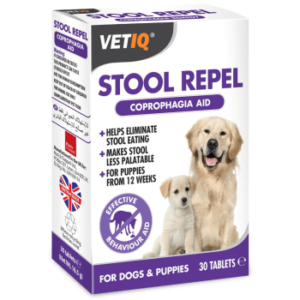 VetIQ® Stool Repel tablets are a natural solution that have been specially formulated to help stop dogs from eating their own poop by making their stool unpalatable to eat.

Check it out here >

Why Does My Dog Eat Poop?

There are actually a lot of reasons why dogs deign to dine on faecal matter.

At various life stages, it’s even considered normal for dogs to engage in this behaviour, especially when they’re puppies. Mother dogs will even encourage puppies to eliminate by licking them and then clean up their faeces during the first three or so weeks of life.

Puppies will naturally gravitate toward eating their own droppings, as well as the droppings of other dogs. They might try to eat other animals’ faecal matter (such as that from cats, geese, or horses) as well. Most of the time, they stop this by the time they reach about nine months of age.

Is It Dangerous For Dogs To Eat Poop?

It is not considered dangerous for dogs (puppies, in particular) to eat their own poop. If they consume poop from another animal, though, that can lead to serious health problems. This is especially true if the stool turns out to be contaminated with toxins, viruses, or parasites.

As mentioned, most puppies stop eating poop by the time they’re about nine months old. If an adult dog develops coprophagia, that can be cause for concern. This can be indicative of a more serious issue, including the following:

Some dogs also begin eating poop as an adult as a response to an environmental or behavioural issue. For example, they might be nervous or stressed out. Here are some common environmental problems that can contribute to dodgy dining: 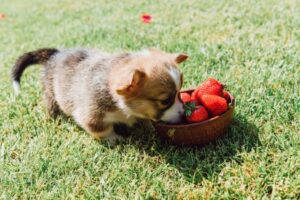 How to Stop My Dog Eating Poop (How To Stop Coprophagia)

Okay, you have a better understanding of what coprophagia is and the issues behind it. You might be wondering now, though, what you can do to get your dog to stop eating poop. The following are some of the most effective practices you can use to change your dog’s dining habits:

VetIQ® Stool Repel tablets are a natural solution that have been specially formulated to help stop dogs from eating their own poop by making their stool unpalatable to eat.

Check it out here >

You should also talk to your dog’s vet if they’re regularly eating poop. This is especially important if they’re eating poop as adults. Your vet can test for parasites, nutrient deficiencies, and other health problems. This helps you pinpoint the problem and put a stop to it as soon as possible.

How To Stop My Dog Eating Poop

If you are ready to kick coprophagia to the curb and stop your dog from eating poop once and for all, be sure to try the tips outlined above. They’ll help you reign in your dog’s diet and ensure they’re only eating what’s meant for them moving forward.

Win a pack of VetIQ Stool Repel for your dog!